Here at Purple Mountain Music, we offer a full service recording and mixing
facility dedicated to the highest quality of reproduction and manipulation of audio
for music and motion picture release.
At the heart of the facility is a 4064 G+ Solid State Logic recording console with  Total Recall and Ultimation moving fader automation. This remarkable console  was formally in Studio A at Unique Recording Studios in New York City. There it  was used to create countless hits and major motion picture soundtracks as well  as to launch the careers of several of today’s top mixers including Chris Lord-Alge  and Tom Lord-Alge before being moved to Nashville by John Neil Martin and the  Purple Mountain Music crew.  Here, it continues as the centerpiece to creative and sonic excellence for a new generation of timeless music! 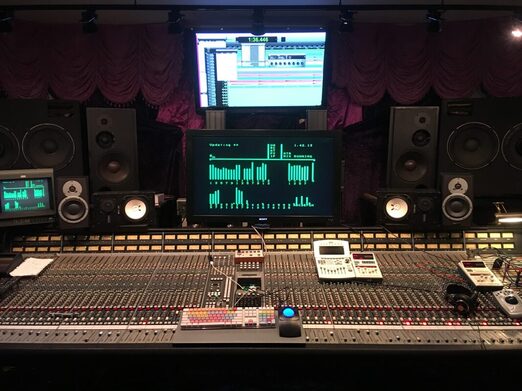 The console has been highly customized by top New York studio tech Dan  Zellman (of David Bowie fame) and boasts a mix of original E-series Black EQs  and G series EQs. Total Recall is possible of all parameters and channel  settings. The console also has a modified custom center section, outputs and monitor routing. The legendary sound of this SSL has been used to record and  mix countless numbers of # one hits, film soundtracks and Grammy/Oscar  winning songs for some of the most admired and well known names in music.

The main Purple Mountain Music Studio reverb “chamber” is an iconic EMT 140  plate from the original Record Plant Studios in New York City. This ambient  magic of this infamous “EMT #4” reverb has been heard on thousands of historic  and classic recordings including John Lennon’s “Imagine” and “Dream Number 9”  among others.

In addition to the SSL 4064 G+ console (nicknamed SLAM JAM by the Purple  Mountain crew} there are several other noteworthy recording consoles at Purple  Mountain Music Studios as well that help provide a wide and diverse pallet of  sonic possibilities, They include a sidecar Neve 5302 Melbourn all discreet  recording console with 33115 EQs. This desk was originally custom built for the  BBC music studios in London and upon acquisition by John Neil Martin was  further customized by original Neve designer Geoff Tanner for a one-of-a-kind  sound like no other. The all tube RCA BN2A and Ampex 600 consoles round out  the selection to cover anything from the most modern hi fidelity of tones to that  infamous Sun Studio sound.

The studio is also equipped with a variety of vintage and modern tape machines  including “Dr Mabuse”, a 2” 24 track Studer MCH-820 multitrack recorder with  Dolby SR formerly at Pixar Studios in Burbank and a Studer A-80 RC Mk II 1/2”  master recorder from the legendary Sun Studios. In addition are 4 multicore  Macintosh Computers with dedicated hardware controllers and loaded with the  latest DAW software, plugins, immense sample libraries. These include  recognizable names such as Avid, Ableton, Native Instruments, Spitfire, East  West, Waves, Slate, Proppelerhead and many more. 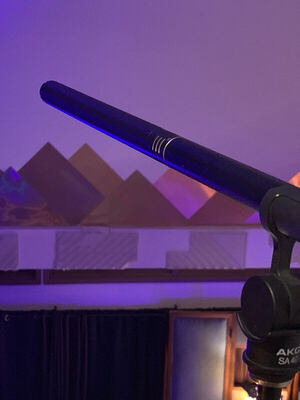 ​Our microphone collection is the gold standard offering original, excellently  maintained classics including vintage Neumanns like the VF-14 U-47/48 and the  M-49b. When looking for the classic smooth reach for one of our RCA ribbons  such as a rare and beautifully kept 77-B or a matching pair of 74s. A one of a  kind prototype by Cameron Labs brings a tone to the mountain that truly can be  found nowhere else. A long list of other high end studio standards from AKG,  Sennheiser, EV and more complete the list and provide a diverse collection to  choose from.
The tracking rooms include an A main room with 40’ curved ceilings and a high  balcony for ambient microphones over 30’ above the main floor.

The first floor of A houses a 1928 Baldwin concert grand piano, a full set of  Ludwig orchestral drums and other instruments including a Hammond organ, a  collection of Moog synthesizers and over 20 vintage and modern guitar amplifiers  from the likes of Marshall, Mesa Boogie, Fender, Roland, Vox, Ampeg and  others.
On the third floor of A, in a separate isolation room off the balcony, is a 1902  Estey Grand piano and a variety of acoustic guitars by Martin, Taylor and  Gibson.

Under the microphone balcony resides a completely floated custom isolation  booth for recording vocals, various acoustic instruments, sound design and  A.D.R. etc. . .
​
A second B tracking room is connected to the main room. The lounge area and  back patio, complete with fire pits, ties it all together and offer a perfect escape to  work on arrangements, write a new song or simply enjoy the serenity provided by  the forest and wildlife that surrounds the studio. Deer, fox and eagles are  common sights here as the studio is close to the shore of a major lake just  outside of metro Nashville. Gear-heads and tone-masters check out the gear list HERE.
Talk is cheap. Hear what we do, have a listen here. . .
Copyright © 2021 Purple Mountain Music